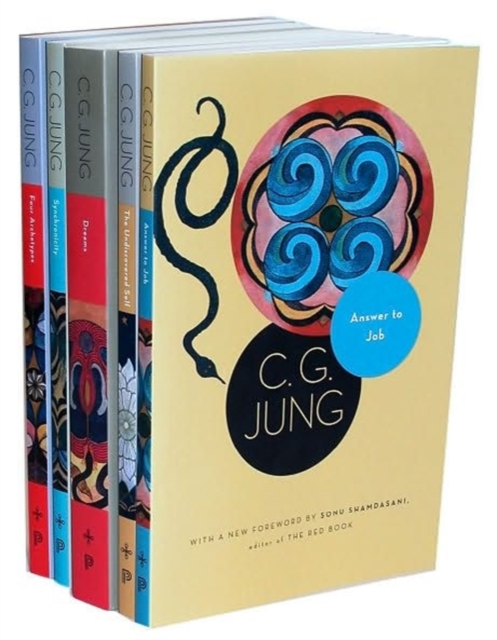 C.G. Jung (Answer to Job, Dreams, Four Archetypes, Synchronicity, and the Undiscovered Self)

These five volumes--the all-time bestselling editions of Jung's work--contain popular selections from The Collected Works of C.G. Jung. Each is newly introduced by Sonu Shamdasani editor of the bestselling The Red Book: Liber Novus & Philemon Professor of Jung History at University College London.
Answer to Job
Considered one of Jung s most controversial works, Answer to Job also stands as Jung s most extensive commentary on a biblical text. Here, he confronts the story of the man who challenged God, the man who experienced hell on earth and still did not reject his faith. Job s journey parallels Jung s own experience as reported in The Red Book: Liber Novus of descending into the depths of his own unconscious, confronting and reconciling the rejected aspects of his soul.
Dreams
Dream analysis is a distinctive and foundational part of analytical psychology, the school of psychology founded by C. G. Jung and his successors. This volume collects Jung s most insightful contributions to the study of dreams and their meaning. The essays reveal Jung s most essential views about dreaming especially regarding the relationship between language and dream. Through these studies, Jung grew to understand that dreams are themselves a language, a language through which the soul communicates with the body.
Four Archetypes
One of Jung s most influential ideas has been his view, presented here, that primordial images, or archetypes, dwell deep within the unconscious of every human being. The essays in this volume gather together Jung s most important statements on the archetypes, beginning with the introduction of the concept in Archetypes and the Collective Unconscious.
Synchronicity: An Acausal Connecting Principle
Jung was intrigued from early in his career with coincidences, especially those surprising juxtapositions that scientific rationality could not adequately explain. He discussed these ideas with Albert Einstein before World War I, but first used the term synchronicity in a 1930 lecture, in reference to the unusual psychological insights generated from consulting the I Ching. A long correspondence and friendship with the Nobel prize winning physicist Wolfgang Pauli stimulated a final, mature statement of Jung s thinking on synchronicity, originally published in 1952 and reproduced here.
The Undiscovered Self
With Symbols and the Interpretation of Dreams
These two essays, written late in Jung s life, reflect his responses to the shattering experience of World War II and the dawn of mass society. Among his most influential works, The Undiscovered Self is a plea for his generation and those to come to continue the individual work of self-discovery and not abandon needed psychological reflection for the easy ephemera of mass culture. In the second essay, one of the last he wrote, Symbols and the Interpretation of Dreams, Jung explains how the symbols that occur in dreams compensate for repressed emotions and intuitions.