Pagina principala Climate Gradients and Biodiversity in Mountains of Italy 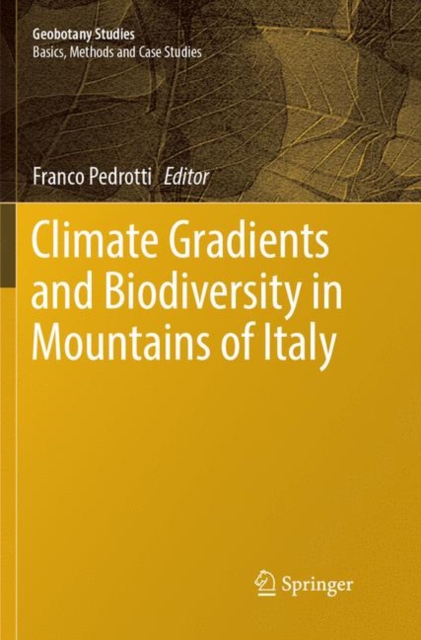 Climate Gradients and Biodiversity in Mountains of Italy

This volume gathers case studies on plant diversity from selected, representative mountain systems of Italy (Mediterranean and Temperate zones), while also addressing the biodiversity of avian fauna. For the Alps, Wilhalm and Prosser examine the species biodiversity (also with the help of very detailed location maps) of the sector of the central Alps that corresponds to the basin of the Adige, including some nearby valleys, between the watershed to the north and the Prealps to the south (Alto Adige and Trentino). In turn, Pedrotti investigates the vegetation series of the same territory in relation to the three climatic sectors identified: prealpine, alpine and endoalpine. Aleffi explores the relationships between the distribution of some species of bryophytes and the main mesoclimatic gradients along a transect through the Valle dell' Adige between 4640'N and 4542'N. Lastly, Siniscalco studies the ways in which alien species are now invading the western Alps, which to date have remained largely unaffected by this phenomenon, unlike the plains and hills.

For the Apennines, Ferrari examines the tree line and the biodiversity of the vegetation of the northern Apennines; for the mountains of Sicily, Bazan conducts a diachronic analysis of the beech forests of the Monti Nebrodi.

The contribution by Venanzoni interprets the chorology of associations of the Magnocaricetalia order throughout Italy, relating it to the climatic and geographic gradients. He describes a total of 55 associations, reporting on the distribution in the Temperate zone (distinguished between the Alpine and Continental) and the Mediterranean zone for each of them.

For the Marches Region, Forconi describes the biodiversity of the avian fauna in relation to the altitudinal gradient and the potential vegetation.