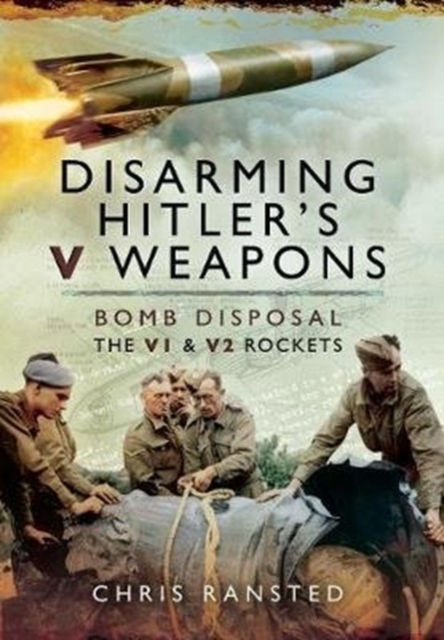 In 1944 the V-1s and V-2s, Hitler's vengeance weapons, were regarded by the Allied leaders in London as the single greatest threat they had faced. It was feared that these flying bombs and rockets might turn the tide of war once again in Germany's favor. Yet, little more than half of these missiles hit their targets, some failing to explode. Their wreckage lay across the southern half of England or in Europe, with contents liable to sudden and deadly ignition. It was the job of specialist Bomb Disposal teams to render the V-weapons safe and uncover their secrets. This is their story. In this unique book Chris Ransted has investigated the work of these unsung heroes who risked their lives every time they were called into action and, in the course of his research he has located the sites of many of the unexploded V-weapons, revealed here for the first time. Mr Ransted also details the methods used by the Bomb Disposal men and the equipment they used. The book is richly illustrated with 266 photographs and diagrams, many of which have never previously been published. In completing this, the most comprehensive study of its kind, the author describes the deeds of those gallant Bomb Disposal men that were awarded one of the highest honors which could have been bestowed upon them by their country the George Medal.
AutorRansted, Chris
EdituraPen & Sword Books Ltd
Dimensiuni157 x 233 x 26
Data Publicarii28/07/2020
Format Necartonata
Numar pagini272
Aceasta este o carte in limba engleza. Descrierea cartii (tradusa din engleza cu Google Translate) este in limba romana din motive legale.
In 1944, V-1 si V-2, armele de razbunare ale lui Hitler, au fost considerate de catre liderii aliati din Londra drept cea mai mare amenintare cu care s-au confruntat. S-a temut ca aceste bombe zburatoare si rachete ar putea transforma din nou valul razboiului in favoarea Germaniei.
Ai adaugat Disarming Hitler's V Weapons in cosul de cumparaturi.