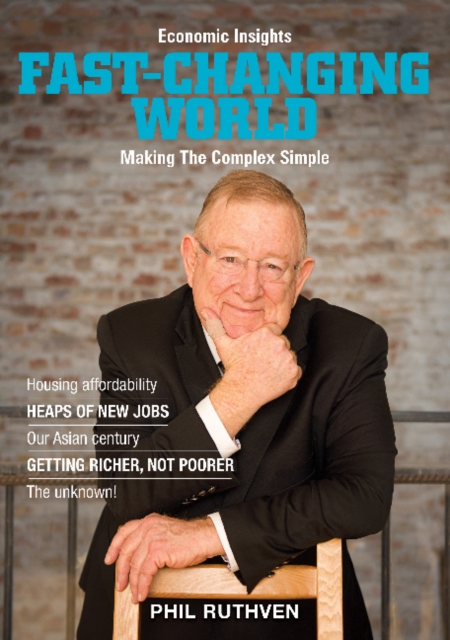 Analysis of things past tells us that the best is yet to come. Phil Ruthven spends a lot of his life proving that facts ruin a good story. Diet and health theories seem to change all the time, and can be confusing — but so do our ever-changing economy, politics and lifestyles. What can, or should, we believe? At a time when we need intelligent and effective leadership of the nation, we are not getting it. Not many other countries are either. We are not alone: Popularism, fake news, alternative facts, straight-out lies and gross exaggerations abound across the globe. Who bothers to get to the truth in the media when scuttlebutt, rumors and sensationalism are more interesting than the reality? Phil Ruthven undoes a range of falsities in his Fast- Changing World. Divorces have been going down, not up, for decades. Marriages are lasting a little longer, not shortening. We are creating far more jobs than we are losing every year. Robots won't lead to massive unemployment. Our standard of living isn't standing still: It has gone up nearly three times (300%) over the past half-century. The Eastern countries overtook the West in economic size in 2016 the same year that China overtook the USA and India overtook Japan. In debunking these common myths, Phil demonstrates how life isn’t as bad as it may seem. In debunking these common myths, Phil demonstrates how life isn't as bad as it may seem.
AutorRuthven, Phillip
EdituraWilkinson Publishing
Dimensiuni150 x 210 x 15
Data Publicarii01/09/2017
Format Necartonata
Numar pagini160
Aceasta este o carte in limba engleza. Descrierea cartii (tradusa din engleza cu Google Translate) este in limba romana din motive legale.
Analiza lucrurilor din trecut ne spune ca cel mai bun este inca sa vina. Phil Ruthven isi petrece mult din viata dovedind ca faptele distrug o poveste buna.
Ai adaugat Fast-Changing World in cosul de cumparaturi.