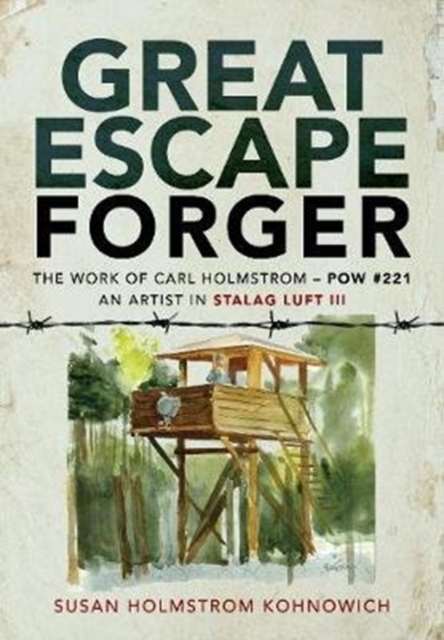 Carl Holmstrom's superb artwork depicts life as a 'kriegie' in a unique manner. But, more than that, he spent the major part of his captivity in Stalag Luft III Prisoner of War Camp, famous for 'The Great Escape'. The audacity of the 76 escapees was only matched by the callousness of the Nazis who murdered 50 after recapture. As well as skillfully recording camp life, Carl forged invaluable official documents. He also sketched his fellow prisoners and encouraged others to take up drawing as hobby.

Remarkably he saved over 200 examples of his work by carrying them on the appallingly arduous 1945 winter march from Poland into Germany.

Post war, Carl Holmstrom said, "The drawings were made during imprisonment and represent a sincere effort to portray to the American people and especially to the relatives of the prisoners, intimate glimpses of Kriegie life." His words proved to be prophetic.

An expansion of his earlier self-published Kriegie Life, this superb book honors Carl's exceptional artistic gift. This book has strong claim to contain the finest collection of POW art to emerge from Nazi-occupied Europe.