Pagina principala It Will Yet Be Heard 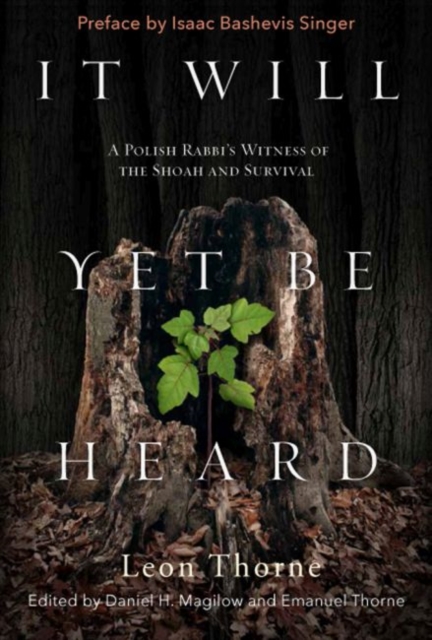 It Will Yet Be Heard

Nobel laureate Isaac Bashevis Singer once described Dr. Leon Thorne’s memoir as a work of “bitter truth” that he compared favorably to the works of Tolstoy, Dostoevsky, and Proust. Out of print for over forty years, this lost classic of Holocaust literature now reappears in a revised, annotated edition, including both Thorne’s original 1961 memoir Out of the Ashes: The Story of a Survivor and his previously unpublished accounts of his arduous postwar experiences in Germany and Poland.

Rabbi Thorne composed his memoir under extraordinary conditions, confined to a small underground bunker below a Polish peasant’s pigsty. But, It Will Yet Be Heard is remarkable not only for the story of its composition, but also for its moral clarity and complexity. A deeply religious man, Rabbi Thorne bore witness to forced labor camps, human degradation, and the murders of entire communities. And once he emerged from hiding, he grappled not only with survivor’s guilt, but also with the lingering antisemitism and anti-Jewish violence in Poland even after the war ended. Harrowing, moving, and deeply insightful, Rabbi Thorne’s firsthand account offers a rediscovered perspective on the twentieth century’s greatest tragedy.

Ai adaugat It Will Yet Be Heard la lista ta de produse favorite.