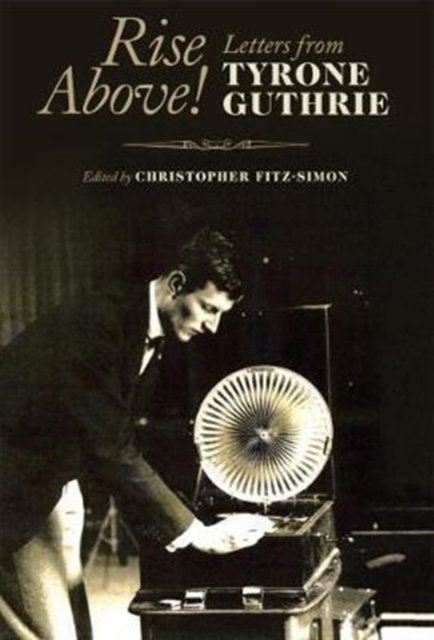 Rise Above! Letters from Tyrone Guthrie

Rise above!: Letters from Tyrone Guthrie details the life of the celebrated theatrical director whose influence on international theatre lives on. Here, in a stunning volume of letters, we are offered a glimpse into the vision of this extraordinary figure as well as a view of the intimacies of his relationships with his mother, sister, wife and friends. During the 1940s and 1950s Guthrie was renowned for liberating the plays of Shakespeare from declamatory delivery and excessive staging. His most enduring legacy was in inspiring the creation of modern theatre buildings where the plays of antiquity could be brought closer to the audience, such as at Stratford, Canada, and the theatre that bears his name in Minneapolis, USA. Of Scots-Irish parentage, he identified most closely with his mother’s home at Annaghmakerrig, Co. Monaghan, which he made his professional headquarters after her death, hosting producers, designers, playwrights and composers there while planning worldwide productions. Guthrie’s letters to his mother, Norah, his wife, Judith, and his sister, Peggy, give a balanced account of his professional and domestic life, and it was on the advice of his sister and her husband, Hubert Butler, that he left his mother’s house to the Irish nation as a workplace for writers and artists. Faced with often seemingly insurmountable financial and personal disaster, his celebrated mantra ‘Rise above!’ was testament to a life lived in the wings of an operatic opening night or a Shakespearean tragedy. Guthrie’s vivid descriptions of places visited are matched by the observational skills of his remarks on the people he worked with, among them well-known figures such as Benjamin Britten, Alec Guinness, Charles Laughton, Siobhán McKenna, Micheál MacLíammóir, the Oliviers and others. Family members come in for as many amused comments as do the famous and distinguished: Cousin Molly is no more spared than Sir Winston Churchill. Fitz-Simon has gathered an important, and entrancing, collection of Tyrone Guthrie’s letters, raising a curtain on the life of Ireland’s leading theatre director of the twentieth-century
Autor
EdituraThe Lilliput Press Ltd
Dimensiuni241 x 166 x 43
Data Publicarii07/11/2017
Format Cartonata
Numar pagini416
Aceasta este o carte in limba engleza. Descrierea cartii (tradusa din engleza cu Google Translate) este in limba romana din motive legale.
Rise above !: Scrisori de la Tyrone Guthrie detaliaza viata celebrului regizor de teatru a carui influenta asupra teatrului international continua. Aici, intr-un volum uimitor de scrisori, ni se ofera o privire asupra viziunii acestei figuri extraordinare, precum si o vedere a intimitatilor relatiilor sale cu mama, sora, sotia si prietenii sai.
Ai adaugat Rise Above! Letters from Tyrone Guthrie in cosul de cumparaturi.