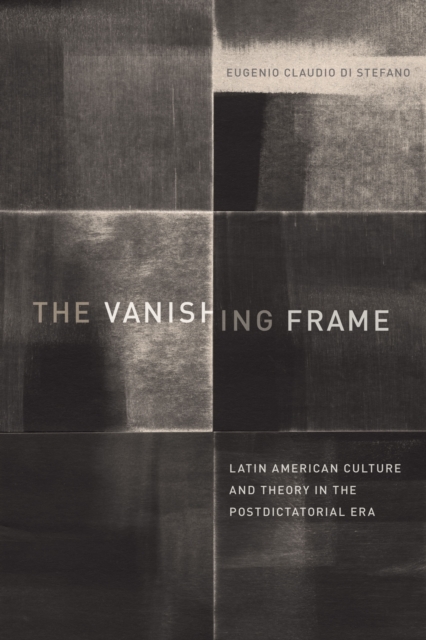 In the postdictatorial era, Latin American cultural production and criticism have been defined by a series of assumptions about politics and art--expecially the claim that political freedom can be achieved by promoting a more direct experience between the textual subject (often a victim) and the reader by eliminating the division between art and life. The Vanishing Frame argues against this conception of freedom, demonstrating how it is based on a politics of human rights complicit with economic injustices. Presenting a provocative counternarrative, Eugenio Claudio Di Stefano examines literary, visual, and interdisciplinary artists who insist on the autonomy of the work of art in order to think beyond the politics of human rights and neoliberalism in Latin American theory and culture.

Di Stefano demonstrates that while artists such as Diamela Eltit, Ariel Dorfman, and Albertina Carri develop a concept of justice premised on recognizing victims' experiences of torture or disappearance, they also ignore the injustice of economic inequality and exploitation. By examining how artists such as Roberto Bola�o, Alejandro Zambra, and Fernando Botero not only reject an aesthetics of experience (and the politics it entails) but also insist on the work of art as a point of departure for an anticapitalist politics, this new reading of Latin American cultural production offers an alternative understanding of recent developments in Latin American aesthetics and politics that puts art at its center and the postdictatorship at its end.