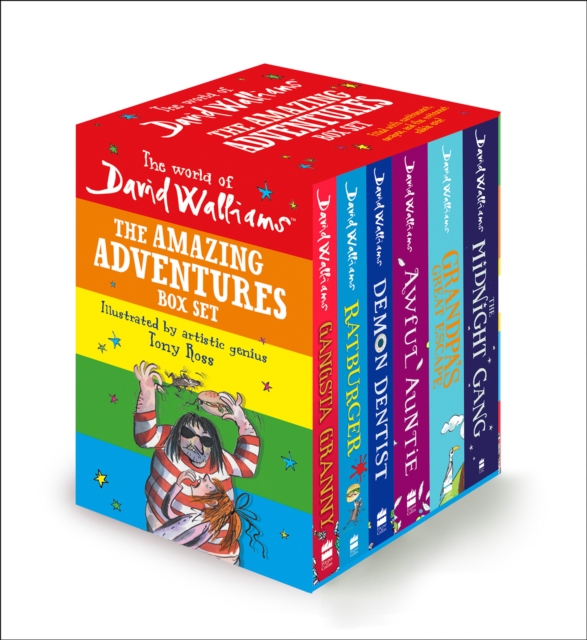 SIX hugely hilarious and spectacularly moving novels from bestselling, critically acclaimed author David Walliams, in one INCREDIBLE box set! THE MIDNIGHT GANG:When Tom gets hit on the head by a cricket ball, he finds himself at Lord Funt Hospital, and is greeted by a terrifying-looking porter. Things go from bad to worse when he meets the wicked matron in charge of the children's ward... But Tom is about to embark on the journey of a lifetime! GRANDPA'S GREAT ESCAPE:Many years ago Grandpa was a World War II flying ace.

But when he is sent to old-folk's home Twilight Towers - run by sinister Matron Swine - it's up to Grandpa and his grandson, Jack, to plot a daring escape. Little do they know the wicked matron is on to them . .

. AWFUL AUNTIE:Stella Saxby is the sole heir to Saxby Hall. But awful Aunt Alberta and her giant owl will stop at nothing to get it from her.

Luckily, Stella has a secret - and slightly spooky - weapon up her sleeve . . .

DEMON DENTIST:Strange things were happening in the dead of night. When children put a tooth under their pillow for the tooth fairy, they would wake to find something creepy in its place. Evil was at work.

But who or what was behind it? RATBURGER:Can Zoe keep her beloved pet rat safe from the clutches of the dastardly Burt of Burt's Burgers? GANGSTA GRANNY:Ben's grandma is the boringest grandma ever: all she wants to do is to play Scrabble and eat cabbage soup. But there are two things Ben doesn't know about her: 1) She was once an international jewel thief. 2) All her life, she has been plotting to steal the crown jewels, and now she needs Ben's help.