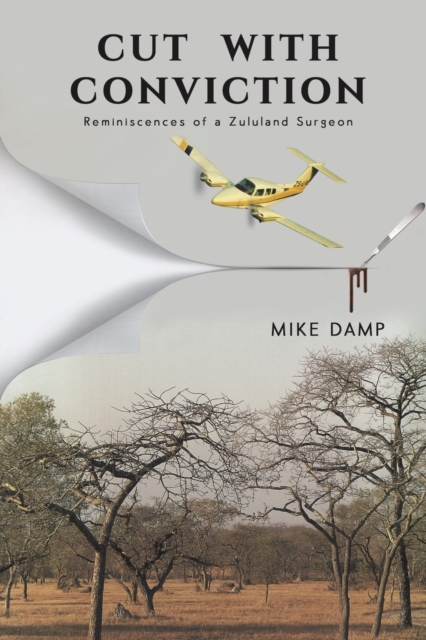 The cheetah had been disrespectful of his grandchildren… Enough reason for a 40-kg, 1.4-metre tall Bushman grandfather to track down and kill a ferocious predator with a stabbing spear in solitary combat in the Kalahari Desert, only to suffer near fatal injuries himself—one of many such patients confronting Mr Mike Damp in this wonderful tale of the way it was in a world that now seems so impossibly faraway.

A heady mix of one man’s adventure through the sort of medical and cultural challenges few modern-day western physicians would ever expect to encounter. This is a story of perseverance and great dedication as well as a reflection of how man’s best intentions and tireless efforts can so easily turn to dust and decay.

But above all, Cut with Conviction is a love story. Of the despairing love for a continent and its people fast being reclaimed by a heart of darkness as unstoppable as the forces of nature that both nurture and destroy as it washes over the vast plains and rivers and mountains of a lost paradise.

Then there is the mix of exhilarating joy and sheer terror in a flying doctor’s life in Zululand, of transporting critically ill patients in all weather conditions over some of the most inhospitable terrain, often with little or no navigational aids while a fellow doctor, seated next to the patient in the cramped space of a small plane, desperately tries to keep life going with the aid of basic life-support equipment.

Africa is a land of unique and rare beauty that mystifies many with its great contradictions. This story unfolds during the apparent stability of grand apartheid and the turbulent times during its collapse and aftermath.

Cut with Conviction is a must-read for all who love adventure, medical issues, flying, travel and Africa.