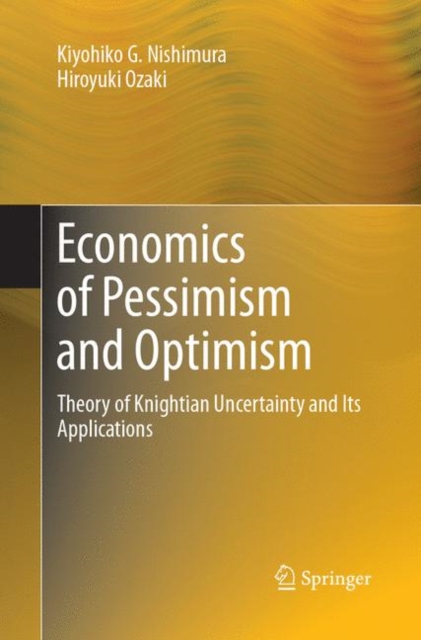 Economics of Pessimism and Optimism

This is the first book to investigate individual's pessimistic and optimistic prospects for the future and their economic consequences based on sound mathematical foundations. The book focuses on fundamental uncertainty called Knightian uncertainty, where the probability distribution governing uncertainty is unknown, and it provides the reader with methods to formulate how pessimism and optimism act in an economy in a strict and unified way. After presenting decision-theoretic foundations for prudent behaviors under Knightian uncertainty, the book applies these ideas to economic models that include portfolio inertia, indeterminacy of equilibria in the Arrow-Debreu economy and in a stochastic overlapping-generations economy, learning, dynamic asset-pricing models, search, real options, and liquidity preferences. The book then proceeds to characterizations of pessimistic (ε-contaminated) and optimistic (ε-exuberant) behaviors under Knightian uncertainty and people's inherent pessimism (surprise aversion) and optimism (surprise loving). Those characterizations are shown to be useful in understanding several observed behaviors in the global financial crisis and in its aftermath. The book is highly recommended not only to researchers who wish to understand the mechanism of how pessimism and optimism affect economic phenomena, but also to policy makers contemplating effective economic policies whose success delicately hinges upon people's mindsets in the market.

Kiyohiko Nishimura is Professor at the National Graduate Institute for Policy Studies (GRIPS) and Professor Emeritus and Distinguished Project Research Fellow of the Center for Advanced Research in Finance at The University of Tokyo. Hiroyuki Ozaki is Professor of Economics at Keio University.