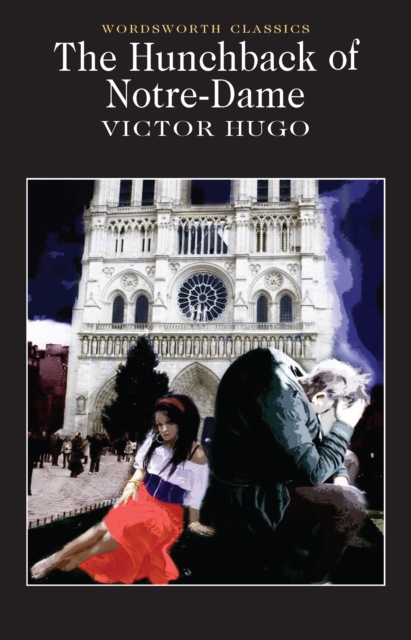 The Hunchback of Notre-Dame (Wordsworth Classics)

The story and characters in Victor Hugo's The Hunchback of Notre-Dame have resonated with succeeding generations since its publication in 1831. It has tempted filmmakers, and most recently animators, who have exploited its dramatic content to good effect but have inevitably lost some of the grays that make the original text so compelling.
From Victor Hugo's flamboyant imagination came Quasimodo, the grotesque bell ringer; La Esmeralda, the sensuous gypsy dancer; and the haunted archdeacon Claude Frollo. Hugo set his epic tale in the Paris of 1482 under Louis XI and meticulously re-created the
day-to-day life of its highest and lowest inhabitants. Written at a time of perennial political upheaval in France, The Hunchback of Notre-Dame is the product of an emerging democratic sensibility and prefigures the teeming masterpiece Les Misé rables, which Hugo would write thirty years later.
He made the cathedral the centerpiece of the novel and called it Notre-Dame de Paris. (It received its popular English title at the time of its second translation in 1833.) Hugo wrote that his inspiration came from a carving of the word "fatality" in Greek that he had found in the cathedral. The inscription had been eradicated by the time the book was published, and Hugo feared that Notre-Dame's Gothic splendor might soon be lost to the contemporary fad for tearing down old buildings. Notre-Dame has survived as one of the great monuments of Paris, and Hugo's novel is a fitting celebration of it, a popular classic that is proving to be just as enduring.
The Modern Library has played a significant role in American cultural life for the better part of a century. The series was foundedin 1917 by the publishers Boni and Liveright and eight years later acquired by Bennett Cerf and Donald Klopfer. It provided the foun-dation for their next publishing venture, Random House. The Modern Library has been a staple of the American book trade, providing readers with affordable hard-bound editions of important works of liter-ature and thought. For the Modern Library's seventy-fifth anniversary, Random House redesigned the series, restoring as its emblem the running torchbearer created by Lucian Bernhard in 1925 and refurbishing jackets, bindings, and type, as well as inau-gurating a new program of selecting titles. The Modern Library continues to provide the world's best books, at the best prices.
Jacket paintings: (front) detail from Notre Dame by Paul Lecomte, courtesy of David David Gallery/SuperStock; (spine) Victor Hugo, 1833, by Louis Boulanger of Giraudon/Art Resource, N.Y.