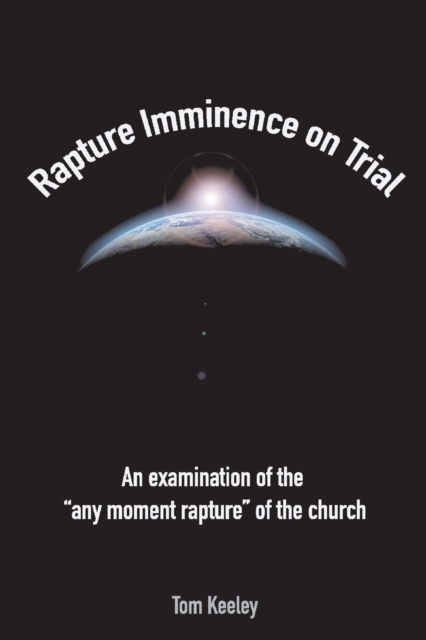 Unfortunately, there is a lot of hesitancy about teaching the subject of Bible prophecy (eschatology) in the church today. Many pastors and even seminaries downplay its importance even though most Christians want to know about end times events. It is the desire of the author of this book to help clear up some of that confusion about the second coming of Jesus to rapture the church. As a graduate of Dallas Theological Seminary and a believer in the pretribulation rapture understanding of Christ's second coming, Bible teacher Tom Keeley was first exposed to the prewrath rapture teaching in the early 1990s. When pastoring a church, he read about the new teaching in Marvin Rosenthal's book, The Prewrath Rapture of the Church. After reading it He was interested but not convinced enough to abandon his belief that the rapture has been able to take place at any moment ever since the time of the apostles. Reviewing that book from time to time over the next few years led to a greater understanding of why the prewrath view claims some generation of the church will face the Antichrist and the Great Tribulation (the seals of Revelation 6), but then be raptured before God's wrath which is described by the trumpets and bowls. This resulted in him concluding that the rapture becomes imminent sometime in the future after certain Bible prophecies are fulfilled. His decision was based on prewrath's stronger support in three areas. It is the best conclusion from the context of the biblical passages concerning the Day of the Lord and Christ's second coming, from the teaching of the early church fathers, and from good common-sense logic with respect to the present world conditions and what happens during Daniel's 70th Week. Over the past few years there has arisen many good resources to go to which explain the prewrath interpretation of the passages concerning the rapture, but the author was disappointed that there was not an effective argument against the pretribulation teachers' claim of imminence, that the rapture is the next prophecy to be fulfilled and could occur at any moment. This is the most fundamental pillar supporting the pretribulation rapture doctrine, so Keeley developed a series of questions and put them into a trial format which challenges the understanding that the rapture is presently imminent. These questions were then tested when he presented them to some leading pretribulation scholars which caused much difficulty for them and their view of rapture imminence. One of these respected teachers commented: "You are making me think, when are you going to write a book on this?" It was soon after that conversation when Keeley decided he needed to put his ideas into print. If you hold to the present day any moment rapture but have never had your position put to the test by a bona fide presentation of the prewrath rapture you need to read these challenges to the pretribulation rapture. The questions in this book will make you rethink about what you believe about the timing of the blessed hope of Christ's return. The author has arranged it for both those who have just a basic knowledge of the rapture and also those who have studied at a Bible College or seminary level and are teachers of Bible prophecy. The more detailed endnotes and appendices are there for those who need more scholarly explanations for what is stated, but the lay person will not get lost in those discussions as they read the main body of the book. No matter where you are in your understanding of the timing of the rapture, this book will expand your knowledge and make you think again about when Jesus can come to rapture His bride, the church, to heaven. Those who are already believers in the prewrath rapture will benefit greatly by seeing how they can effectively share the questions with their pretribulation rapture believing friends to get them to reconsider what they have been taught. The focus of the book deals with three basic yet critical
AutorKeeley, Tom
EdituraBookBaby
Dimensiuni152 x 228 x 15
Data Publicarii02/03/2020
Format Necartonata
Numar pagini198
Aceasta este o carte in limba engleza. Descrierea cartii (tradusa din engleza cu Google Translate) este in limba romana din motive legale.
Din pacate, exista o multime de ezitari cu privire la predarea subiectului profetiei biblice (escatologie) astazi in biserica. Multi pastori si chiar seminarii ii minimizeaza importanta, chiar daca majoritatea crestinilor vor sa stie despre evenimentele din vremurile sfarsite.
Ai adaugat Rapture Imminence On Trial in cosul de cumparaturi.