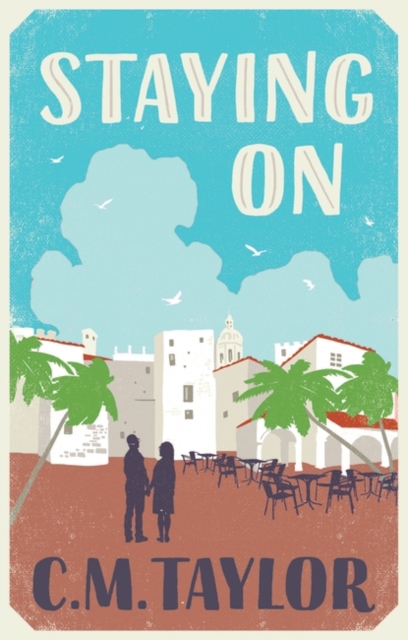 Staying On is a geriatric coming-of-age story and a comedy-drama about an expat family played out between a working patriarch and his charming, self-possessed daughter-in-law. Tony Metcalfe, a seventy-year-old Yorkshireman and his wife Laney run Viva Espagne, a bar in a small village in the mountains beyond the Costa Blanca. Set amongst the bawdy working class expats of Spain - the por favors as the Spanish call them - the monoglot, post-war babies who retired early on good pensions, flocking to the dream of wine and rest and sun around the pool. But now their retirement paradise is shadowed by Brexit: the pound has fallen, pensions are frozen and the property crash happened long ago. Tony dreams of moving back to enjoy the remainder of his life in his childhood home, but Laney wants to stay in the happy valley and forget about England and the dark, unresolved feelings it provokes in their marriage. Tony loves his wife and keeps his dreams to himself along with the fact that Viva is losing money. He couldn't go home even if he tried - nobody would buy an ailing bar in a recession. Tony's only chance of getting home lies in puncturing the silence and blame in his marriage, and turning his bar to profit to sell. This looks impossible for passive, amiable Tony until his only son Nick arrives for an unexpectedly long stay, bringing his young wife Jo and son Fred in tow. Their arrival signals a new chapter in Tony's life, but will it be one in which his dreams are finally realised?
AutorTaylor, C. M.
EdituraPrelude
Dimensiuni130 x 197 x 19
Data Publicarii18/10/2018
Format Necartonata
Numar pagini240
Aceasta este o carte in limba engleza. Descrierea cartii (tradusa din engleza cu Google Translate) este in limba romana din motive legale.
Staying On este o poveste geriatrica de varsta majora si o comedie-drama despre o familie de expat jucata intre un patriarh care lucreaza si nora sa fermecatoare si stapana. Tony Metcalfe, un Yorkshireman in varsta de saptezeci de ani si sotia sa Laney conduc Viva Espagne, un bar intr-un mic sat din muntii de dincolo de Costa Blanca.
Ai adaugat Staying On in cosul de cumparaturi.