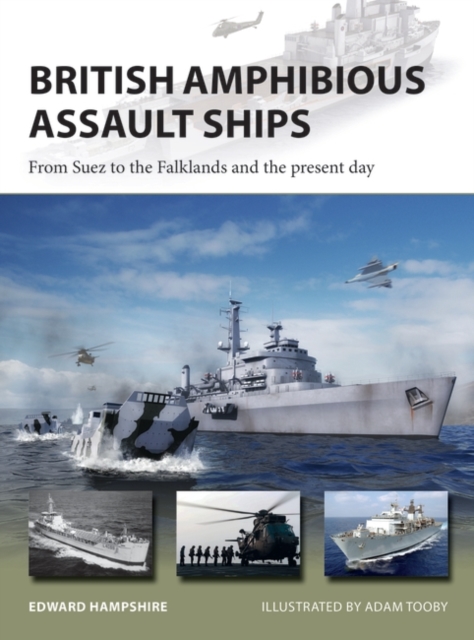 From the first "commando carriers" to the legendary Fearless class and the current generation, this title explores the capabilities, roles, and history of the Royal Navy's frontline amphibious assault ships.

In major operations such as Suez and the Falklands, the use of amphibious assault ships was essential to the military success of the campaigns. The Suez Crisis saw two of the Royal Navy's former light fleet carriers converted into "commando carriers" to specialize in amphibious warfare. In the 1960s these were followed by the famous Fearless class ships - the first purpose-built amphibious assault ships in the Royal Navy. With an internal dock, headquarters capability, and multiple landing craft, these "Landing Platform Docks" were built to project power around the world. When the Falklands were invaded, HMS Fearless was the key to the successful landing in San Carlos.

In the 1990s, a new generation was ordered: the helicopter carrier HMS Ocean and the Albion class LPDs. In recent years Ocean, Albion and Bulwark have been the largest fighting ships of the Royal Navy and have acted as the navy's flagships, as well as being perhaps the most versatile ships in the navy.

This title is an essential guide to British Amphibious Assault Ships across the decades, from the mighty Fearless to the modern Albion. Packed with full-color illustrations, contemporary photography, and detailed analysis, this definitive work explores the history, development, and deployment of the Royal Navy's front line.