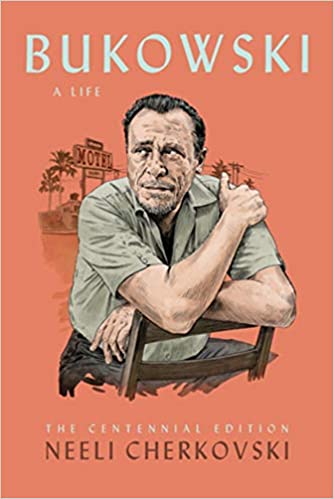 The life of Charles Bukowski-laureate of lowlife Los Angeles-a novelist and poet who wrote as he lived. This is the only biography of Bukowski written by a close friend and collaborator. Neeli Cherkovski began a deep friendship with Bukowski in the 1960s while guzzling beer at wrestling matches or during quieter evenings discussing life and literature in Bukowski's East Hollywood apartment.

Over the decades, those hundreds of conversations took shape as this biography-now with a new preface, "This Thing Upon Me Is Not Death: Reflections on the Centennial of Charles Bukowski."Bukowski, author of Ham on Rye, Post Office, and other bestselling novels, short stories, and poetry collections only ever wanted to be a writer. Maybe that's why Bukowski's voice is so real and immediate that readers felt included in a conversation. "In his written work, he's a hero, a fall guy, a comic character, a womanizing lush, a wise old dog," biographer Neeli Cherkovski writes.

"His readers do more than glimpse his many-sidedness. For some, it's a deep experience. They feel as if his writing opens places inside of themselves they might never have seen otherwise.

Often a reader comes away feeling heroic, because the poet has shown them that their ordinary lives are imbued with drama."Full of anecdotes, wisdom, humor, and insight, this is an essential companion to the work of a great American writer. Long-time Bukowski fans will come away with fresh insights while readers new to his work will find this an exhilarating introduction. "In his death, I hear him clearly," Cherkovski writes.

"His voice comes to me resonant, full of unforced authority, a message of endurance, self-reliance, and honesty of expression. At the same time, he is also saying, 'Poetry is a dirty dishrag. Keep laughing at yourself on the way out the door.' "