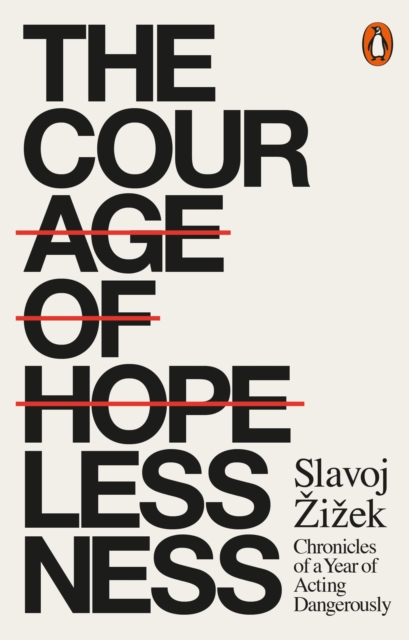 The maverick philosopher returns to explore today's idealogical, political and economic battles, and asks whether radical change is possible

In these troubled times, even the most pessimistic diagnosis of our future ends with an uplifting hint that things might not be as bad as all that, that there is light at the end of the tunnel.

Yet, argues Slavoj Žižek, it is only when we have admit to ourselves that our situation is completely hopeless - that the light at the end of the tunnel is in fact the headlight of a train approaching us from the opposite direction - that fundamental change can be brought about.

Surveying the various challenges in the world today, from mass migration and geopolitical tensions to terrorism, the explosion of rightist populism and the emergence of new radical politics - all of which, in their own way, express the impasses of global capitalism - Žižek explores whether there still remains the possibility for genuine change. Today, he proposes, the only true question is,or should be, this: do we endorse the predominant acceptance of capitalism as fact of human nature, or does today's capitalism contain strong enough antagonisms to prevent its infinite reproduction? Can we, he asks, move beyond the failure of socialism, and beyond the current wave of populist rage, and initiate radical change before the train hits?

'Žižek is a thinker who regards nothing as outside his field: the result is deeply interesting and provocative' - Guardian

'Žižek leaves no social or cultural phenomenon untheorized, and is master of the counterintuitive observation' -New Yorker