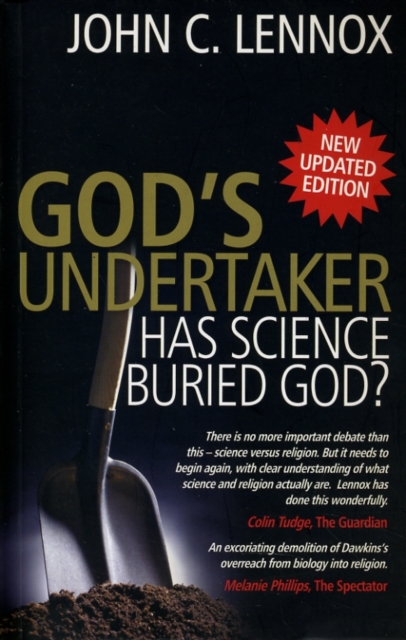 If we are to believe many modern commentators, science has squeezed God into a corner, killedand then buried him with its all-embracing explanations. Atheism, we are told, is the only intellectually tenable position, and any attempt to reintroduce God is likely to impede the progress of science. In this stimulating and thought-provoking book, John Lennox invites us to consider such claims very carefully.

Is it really true, he asks, that everything in science points towards atheism? Could it be possible that theism sits more comfortably with science than atheism? Has science buried God or not? Now updated and expanded, God's Undertaker is an invaluable contribution to the debate about science's relationship to religion.

"As an agnostic in the true sense of the word as 'not knowing, ' I found John Lennox's book intriguing and much food for thought... This is a well written and though-provoking book and will contribute to a reasoned discussion on a fundamental question."
Alan Emery, Emeritus Professor of Human Genetics, University of Edinburgh

"This short book is more than just a critical analysis of the deep question posed in its title. It is a scientific detective story, which keeps the reader on their toes as the evidence is put in place bit by bit."
Keith Frayn, Professor of Human Metabolism, University of Oxford

"A brilliantly argued re-evaluation of the relation of science and religion, casting welcome new light on today's major debates. A must-read for all reflecting on the greatest questions of life."
Alister McGrath, Professor of Theology, Ministry and Education, King's College, London