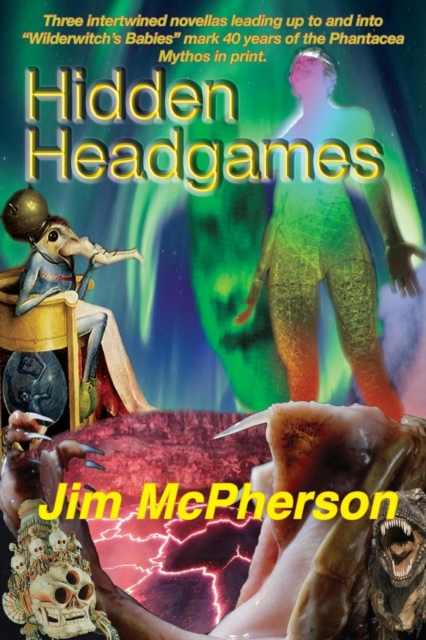 Marking forty years of Jim McPherson's Phantacea Mythos in print, "Hidden Headgames" presents three intertwined novellas featuring characters who appeared during ‘The Thrice-Cursed Godly Glories' and 'Launch 1980' epic fantasy trilogies.
This collection leads up to and into the start of 'Wilderwitch's Babies'. That as yet open-ended saga began with the 2016 mini-novel entitled “Decimation Damnation” (Phantacea Phase Two #1). It in turn marked the inception of the Phantacea Phase Two storylines.
“The Forgotten Fiend”, features the demon-devil variously known as Smiler or the Judge, among many another name or appellation. Somewhat uniquely among his not altogether evil ilk, he can never be remembered unless he wants to be remembered, hence the title. It tells of his efforts to thwart the machinations of Thrygragos Byron to render the Hidden Headworld of Sedon’s Head that Great God's own domain.
Once this Byron, often called the Unmoving One, who's all head and no body, hence also Bodiless Byron, has made the Head’s landmass his to rule, he plans to lead his third generational offspring and their fellow Master Devas, called devils in the Phantacea Mythos, back to the stars. (Devils are extraterrestrial, skyborn, whereas daemons or demons are planetary, the eldritch earthborn.)
Turns out Great Byron is the main mover behind the launching of the Cosmic Express from the Outer Earth. Once a suitable new world is thereby discovered, he intends to facilitate a mass escape from their effective prison for 6,000 years: namely, the Whole Earth. What with so much else going on, that first week of Tantalar 5980, it’s difficult to tell if either Smiler or Bodiless Byron comes out ahead of the game at first.
“Pyrame’s Progress”, focuses on Pyrame Silverstar’s attempt to reassert her previous position as the Hidden Headworld’s foremost female Perpetual Presence during that selfsame time period. Until she was summarily ill-starred (cathonitized or catasterized) thirty years earlier for killing the Male Entity in his Eleventh Lifetime, Pyrame was the devic half-mother of all the Sed-sons born on the Head over the multiple millennia of its existence.
Since their devic half-father, the Moloch Sedon himself, cathonitized her she wants revenge on him as well; he arguably being the Devil, capitalized. In pursuing her goals she runs afoul of the Witches of Weir, whose Panharmonium Project resulted in the Nuclear Dragons preparing to obliterate the Outer Earth’s Centauri Island, launch site of the Cosmic Express.
Having lost her solidifying demon when she was ill-starred, and having never had a power focus anyhow, things are looking poorly for her (and her human shell) until …
“Acquiring Nihila”, picks up on stories of the deviant Fisherwoman and the highborn, but increasingly unstable Master Deva now calling herself Freespirit Nihila. Both of these characters were major players in “Goddess Gambit” and, to a somewhat lesser degree, “Helios on the Moon”.
It is largely Nihila who saves the Dual Entities from utter ruination on the moon. It’s also she who almost instantly regrets doing so. Re-enter Pyrame Silverstar and the Witches of Weir, this time on the same side.
By the end of the collection, some of those whose stories are recounted herein can rightly claim to be winners of these Hidden Headgames. The biggest one appears to be Pyrame’s long lost (by her) demon. This would be Primeval Lilith, the ages-old, earthborn mother of Anti-Patriarch Cain, slayer of Abel.
Then again it’s still only the middle of Tantalar 5980.