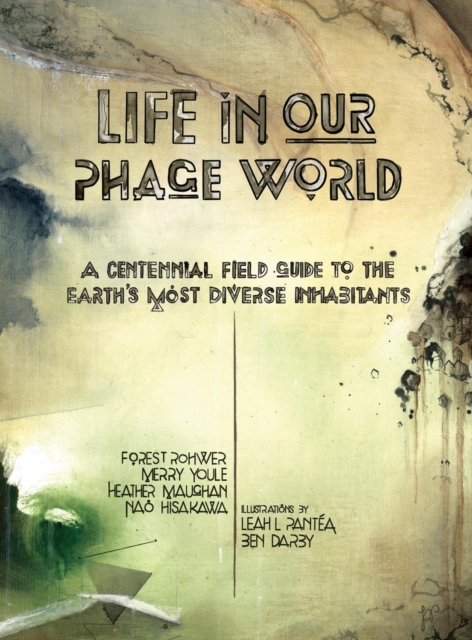 Life in Our Phage World

We share the Earth with more than 10,000,000,000,000,000,000,000,000,000,000 phages. Everywhere they thrive, from well-fed guts to near-boiling acidic springs, from cryoconite holes to endolithic fissures. They travel from one microbial host to the next as virions, their genetic weapons packaged inside a protective protein shell. If you could lay all of these nanoscopic phage virions side-by-side, the line-up would stretch over 42 million light years. Through their daily shenanigans they kill or collaborate with their microbial hosts to spur microbial evolution and maintain ecosystem functioning. We have learned much about them since their discovery by Frederick Twort a century ago. They also taught us that DNA, not protein, is the hereditary material, unraveled the triplet genetic code, and offered their enzymes as indispensible tools for the molecular biology revolution. More contributions will be forthcoming since the vast majority of phages await discovery. Phage genomes harbor the world's largest cache of unexplored genetic diversity, and we now have the equipment needed to go prospecting. Although there are field guides to birds, insects, wild flowers, even Bacteria, there was no such handbook to guide the phage explorer. Forest Rohwer decided to correct this oversight, for novice and expert alike, and thus was born Life in Our Phage World. A diverse collection of 30 phages are featured. Each phage is characterized by its distinctive traits, including details about its genome, habitat, lifestyle, global range, and close relatives. The beauty of its intricate virion is captured in a pen-and-ink portrait by artist Benjamin Darby. Each phage also stars in a carefully researched action story relating how that phage encounters, exploits, kills, or otherwise manipulates its host. These behaviors are imaginatively illustrated by fine artist Leah L. Pantea. Eight researchers that work closely with phages also relate their experiences as inhabitants of the phage world. Rohwer has years of first-hand experience with the phage multitudes in ecosystems ranging from coral reefs to the human lung to arctic waters. He pioneered the key metagenomic methods now widely used to catalog and characterize Earth's microbial and viral life. Despite research advances, most people, many scientists included, remain unaware of the ongoing drama in our phage world. In anticipation of 2015, the centennial of phage discovery, Forest assembled a cadre of writers, artists, scientists, and a cartographer and set them to work. The result? This alluring field guide-a feast for the imagination and a celebration of phage diversity.
AutorRohwer, Forest; Youle, Merry; Maughan, Heather
EdituraWholon
Dimensiuni228 x 290 x 35
Data Publicarii01/12/2014
Format Cartonata
Numar pagini
Aceasta este o carte in limba engleza. Descrierea cartii (tradusa din engleza cu Google Translate) este in limba romana din motive legale.
Impartim Pamantul cu peste 10.000.000.000.000.000.000.000.000.000.000.000 de fagi. Oriunde se dezvolta, de la intestine bine hranite la izvoare acide aproape de fierbere, de la gauri de crioconit la fisuri endolitice.
Ai adaugat Life in Our Phage World in cosul de cumparaturi.