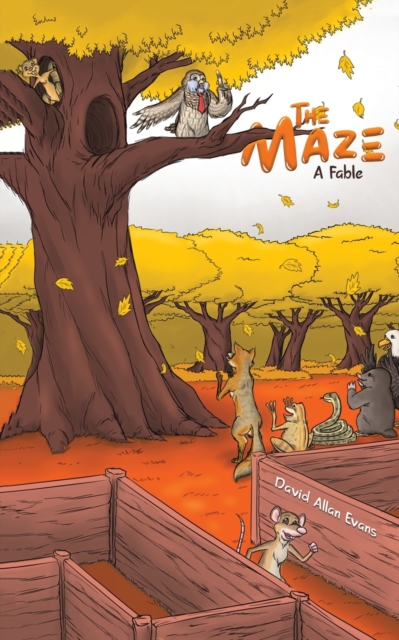 Like Aesop's Fables and Orwell's Animal Farm, The Maze is populated with animal characters who, in their words and actions, reveal truths about human nature. In The Woods, a very popular, clever, and ambitious rat named Sniff-who commands a pack of deputy rats known as The Five-intends to replace the aging leader, Owl, when he retires on election day in two weeks. As a famous athlete of the air in his youth, Owl has established The Tradition of Wings. In his speeches to the animals, Sniff-an assistant to Owl but already acting as if he's the leader-promises to establish what he calls "The Kingdom of Sharing," in which rats will be "leaders" and all other animals will be "followers." Opposing Sniff's rise to power are two winged animals-a well-known poet hawk, Wing, and his studious friend, Butterfly-and Claws, a young, robust, and competitive squirrel. The central image of the story is a maze. Sniff has one built ostensibly for community recreation but actually to make money and to display rats' superiority as maze-runners. Other characters in this sometimes-humorous story include Spider, an architect; Snake, a "shady" character; Stub, a mole who assists Sniff; and Frog, an instructor of bug-catching. The Maze is not only about human nature but about animal life in general. It explores necessities of survival such as status and power, altruism and self-interest, the defense of territory, and the conquering of enemies through group cooperation.
AutorEvans, David Allan
EdituraAUSTIN MACAULEY PUBLISHERS USA
Dimensiuni
Data Publicarii30/11/2020
Format Necartonata
Numar pagini200
Aceasta este o carte in limba engleza. Descrierea cartii (tradusa din engleza cu Google Translate) este in limba romana din motive legale.
Ai adaugat MAZE in cosul de cumparaturi.