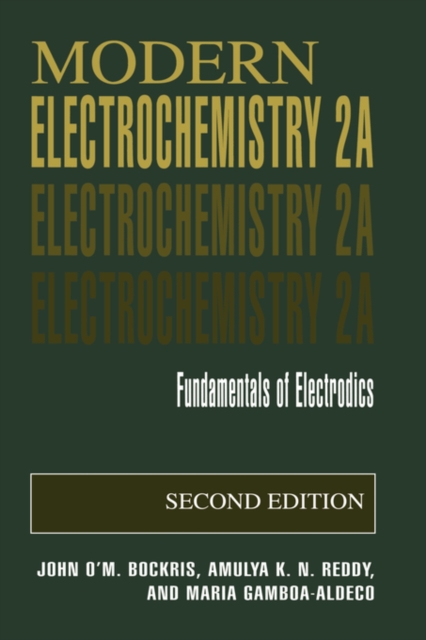 This book had its nucleus in some lectures given by one of us (J. O'M. B. ) in a course on electrochemistry to students of energy conversion at the University of Pennsyl- nia. It was there that he met a number of people trained in chemistry, physics, biology, metallurgy, and materials science, all of whom wanted to know something about electrochemistry. The concept of writing a book about electrochemistry which could be understood by people with very varied backgrounds was thereby engendered. The lectures were recorded and written up by Dr. Klaus Muller as a 293-page manuscript. At a later stage, A. K. N. R. joined the effort; it was decided to make a fresh start and to write a much more comprehensive text. Of methods for direct energy conversion, the electrochemical one is the most advanced and seems the most likely to become of considerable practical importance. Thus, conversion to electrochemically powered transportation systems appears to be an important step by means of which the difficulties of air pollution and the effects of an increasing concentration in the atmosphere of carbon dioxide may be met. Cor- sion is recognized as having an electrochemical basis. The synthesis of nylon now contains an important electrochemical stage. Some central biological mechanisms have been shown to take place by means of electrochemical reactions. A number of American organizations have recently recommended greatly increased activity in training and research in electrochemistry at universities in the United States.
Autor
EdituraSpringer Science+Business Media
Dimensiuni241 x 164 x 50
Data Publicarii01/01/2001
Format Cartonata
Numar pagini763
Aceasta este o carte in limba engleza. Descrierea cartii (tradusa din engleza cu Google Translate) este in limba romana din motive legale.
Aceasta carte si-a avut nucleul in unele prelegeri sustinute de unul dintre noi (J. O'M.
Ai adaugat Modern Electrochemistry 2A in cosul de cumparaturi.