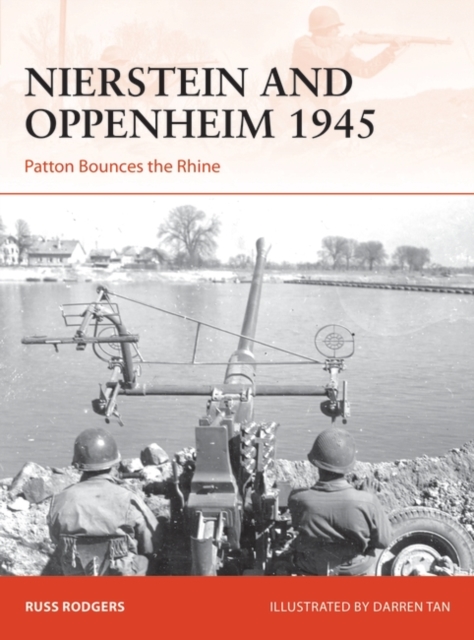 A highly illustrated new study of Patton's daring attempt to bounce the river Rhine in March 1945.

In January 1945, the collapse of the German front along the Siegfried Line led to a large-scale dissolution of German combat forces and capability. Pressed hard by Allied forces advancing eastward, German units often found themselves trapped west of the Rhine River. With his eye on history, US Lt. Gen. George S. Patton, Jr. was determined to be the first leader since Napoleon to make an assault crossing of the Rhine. The most logical crossing-place was at Mainz, as it served as a major railroad logistical link from west to east. However, Patton was aware that this would be obvious to the Germans, and therefore he and his staff made rapid plans for another site at Nierstein and Oppenheim, about 12 miles south of Mainz.

The crossing began at 2230 hours on March 23, when the first boats carrying 11th Infantry Regiment troops left the western bank of the Rhine. They met with little opposition; despite a few sharp counterattacks, overall resistance was light and American forces suffered few casualties. By March 24, the US 4th Armored Division under Brig. Gen. William Hoge crossed the Rhine and began the exploitation phase. By March 26, the exploitation to the Main River was clearly a rout, exacerbated by additional crossings of the Rhine by other Allied units over the next few days. Illustrated throughout with stunning full-color artwork, maps, and bird's-eye-views, this title details the complete history of this dramatic campaign.