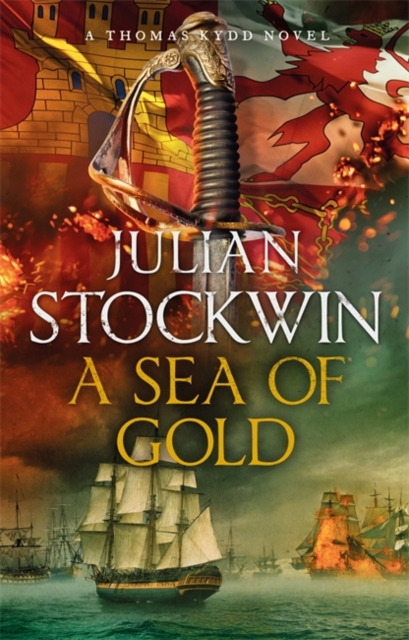 'Tension surges through A Sea of Gold . . . In this rousing yarn, Stockwin again raises naval fiction to a new level' - Quarterdeck

'Stockwin has surpassed himself with A Sea of Gold . . . a fine, fully favoured vintage yarn' - Warships

1809. After his heroic actions during the retreat to Corunna, Captain Sir Thomas Kydd is the toast of London society. Here he falls in with the legendary frigate captain, Lord Thomas Cochrane.

So begins a relationship, professional and personal, that will be unlike any that Kydd has known: a relationship that will lead him, almost simultaneously, to first glory, then ruin.

The French fleet is massing in the Basque Roads in a near impregnatable position. The Admiralty orders Cochrane to command an attack, to the chagrin of more senior officers who object to being overlooked and Cochrane's reputation for daring. Cochrane insists that his new friend, Kydd, is in the forefront of the assault armada, a motley collection of rocket, bomb and fire ships that will set the anchorage ablaze - this despite Kydd's almost pathological fear of fire.

The fallout from what follows will see Kydd financially ruined, with only his former shipmates, his oldest friend of all, Nicholas Renzi, and the whisper of hidden Spanish treasure promising the sea of gold that he needs to save himself.