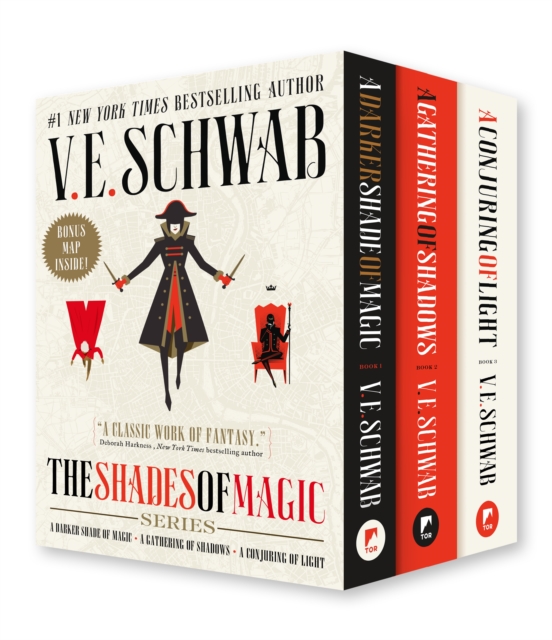 Kell is one of the last Antarimagicians with a rare, coveted ability to travel between parallel Londons; Red, Grey, White, and, once, Black. Unofficially, Kell is a smuggler, servicing people willing to pay for even the smallest glimpses of a world they'll never see. It's a defiant hobby with dangerous consequences.

A Darker Shade of Magic  Kell serves the Maresh EmpireRed London, as he calls itas an official ambassador, traveling between the frequent bloody regime changes in White London and the court of George III in the dullest of Londons. After one such visit goes awry, Kell escapes his home for Grey London and runs into Delilah Bard, a cut-purse with lofty aspirations. Now perilous magic is afoot, and treachery lurks at every turn. To save all of the worlds, they'll first need to stay alive.

A Gathering of Shadows  While Red London is caught up in the pageantry and thrills of the Element Games, another London is coming back to life, and those who were thought to be forever gone have returned.

A Conjuring of Light  As darkness sweeps the Maresh Empire, the once precarious balance of power among the four Londons has reached its breaking point.