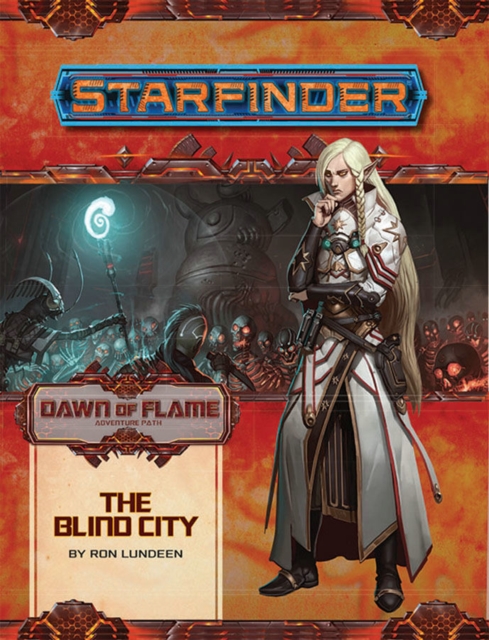 Starfinder Adventure Path: The Blind City (Dawn of Flame 4 of 6)

An ancient, eldritch tablet the heroes recovered during their previous adventure needs translating. However, when they take it to an expert for help, cultists of Azathoth attempt to steal the object for their own sinister purposes. After dealing with the zealots and deciphering the relic, the heroes learn of another deep-sun locale called Ezorod and the evil elder entity that has its attention focused there. With the tablet in hand, the heroes have the map and the key to Ezorod, allowing them to enter the place and explore it. When they do, they find a site as weird as its map. Within this lightless oubliette, the heroes face ghastly creatures and find magical technology that could advance sun diving by leaps. Taking it destabilizes Ezorod, and as the PCs escape the solar dungeon, they receive a mysterious message that heralds a future confrontation!

The Blind City is a Starfinder Roleplaying Game adventure for four 7th-level characters. This adventure continues the Dawn of Flame Adventure Path, a six-part, monthly campaign in which the players uncover a plot that threatens the Pact Worlds sun. It also includes an article on cults of the Pact Worlds, an array of weird technology and magic items players can use, and a selection of bizarre new monsters from various places in the multiverse.