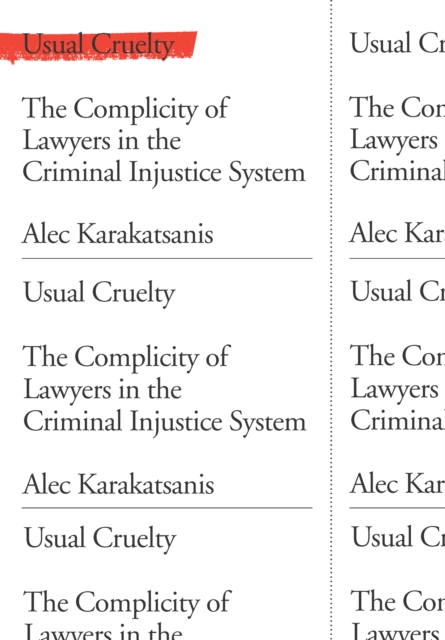 From an award-winning civil rights lawyer, a profound challenge to our society’s normalization of the caging of human beings, and the role of the legal profession in perpetuating it

Alec Karakatsanis is very interested in what we choose to punish. For example, it is a crime in most of America for poor people to wager in the streets over dice; dice-wagerers can be seized, searched, have their assets forfeited, and be locked in cages. It’s perfectly fine, by contrast, for people to wager over international currencies, mortgages, or the global supply of wheat; wheat-wagerers become names on the wings of hospitals and museums.

He is also very concerned about how the bail system, meant to ensure that people return for court dates, has morphed into a way to lock up poor people who have not been convicted of anything. He’s so concerned about this that he has personally sued court systems across the country, resulting in literally tens of thousands of people being released from jail when their bail was found to be unconstitutional.

Karakatsanis does not believe there should be two different justice systems for the rich and for the poor. And he certainly doesn’t think people who have gone to law school, passed the bar, and sworn to uphold the Constitution should be complicit in the mass caging of human beings. Usual Cruelty is a profoundly radical reconsideration of the American “injustice system” by someone who is actively, wildly successfully, challenging it.