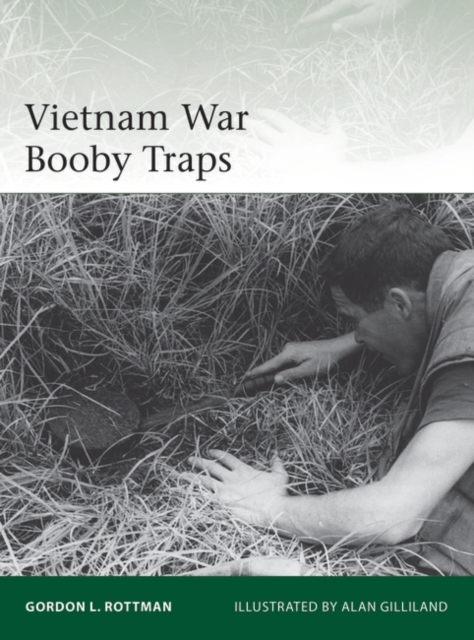 Written by a noted authority, this fully illustrated study investigates the development, construction, use, impact, and legacy of the booby traps used by Viet Cong forces during the Vietnam War.

During the Vietnam War, the Viet Cong were frequently unable to hold their own in stand-up fights against US and allied forces who were superior in strength, firepower, mobility, and logistics. They relied instead on traditional guerrilla warfare tactics including small-scale hit- and-run attacks, ambushes, terrorist actions, and precision attacks against bases. These included one of the oldest of guerrilla weapons--the boobytrap.

Booby traps could be made in large numbers in village workshops and jungle camps using locally available materials as well as modern munitions. The VC were adept at making booby traps “invisible” in the varied terrain of Vietnam, often emplacing them in locations and surroundings totally unexpected by their enemies. Booby traps could be incredibly simple or startlingly complex and ingenious, ranging from pointed sticks to command-detonated submerged floating river mines. Besides a wide variety of booby traps, they also used land and water mines, both contact/pressure-detonated and command-detonated. Between January 1965 and June 1970 11 percent of US troop deaths in action and 17 percent of injuries were by caused booby traps and mines.

This fascinating title explores not only the wide variety of booby traps employed by the Viet Cong, but also their various uses in halting, stalling, or locating an enemy, and the many evolutions these traps underwent in order to retain the element of surprise. Written by a Vietnam veteran with first-hand experience of such traps, this is an engaging look at one of the most frightening aspects of guerrilla warfare.